Hiking on the Green Trail to Vukov Konak 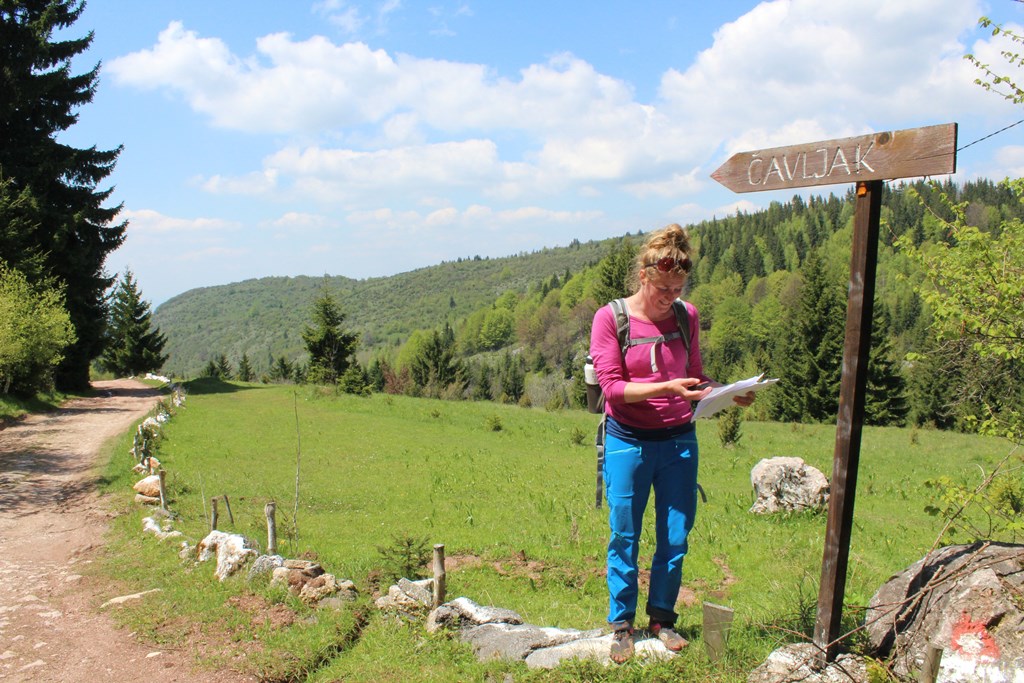 A few weeks ago while I was still in Amsterdam, I saw a post on the Terra Dinarica Facebook page about a guesthouse named Vukov Konak. They were looking for volunteers to help them during the summer season. Of course my plan was (and still is) to hike the White Trail, but I couldn’t help clicking and scrolling down Vukov Konaks page. When I came across a video that showed a little concert in their cosy wooden living room, I knew I had to go and find that place. If a video post on Facebook can touch me, who knows what can happen in real life.

So I start searching “how to get to Vukov Konak” and found out that it was only a one-day-hike from Sarajevo. Terra Dinarica made it even easier with the tour “Hiking from Sarajevo to Vucja Luka” they created in Outdooractive. This tour is part of the Via Dinarica Green Trail which will be finished soon. I could download the GPS track and print the map with descriptions. Een kind kan de was doen, is wat we would say in The Netherlands. It means that the job can be done even by a child…

When I told Maggie, a girl from the US who works for Terra Dinarica, about my plan to hike to Vukov Konak, she immediately decided to join me. Thrilled and excited we met at Vijećnica, the starting point in middle of Sarajevo. Maggie printed out the description of the route and I brought my new GPS device. Besides spending the day in the mountains, for me it was also about getting used to use a GPS while hiking. I’m easily distracted by thoughts, conversations and of course by nature. Which is all right and I enjoy that, but I have to prepare myself for this summer. On the Via Dinarica it will be necessary to have some navigation skills and be focussed. Although a GPS makes it a whole lot easier, it is quiet some work to figure out how that thing works. With this hike I could check and test everything I’ve learned so far.

Cheerful chatting we started to climbed our way out of the city centre towards the yellow fortress. There we found the first trail markers that led us through the labyrinth of small streets and steep stairs. Although there were quiet a lot of stray dogs, we safely reached the first viewing point where we could fill our water bottles. My GPS told us that we were still on the right track, our green line perfectly matched the purple line on the screen. Maggie called Vukov Konak to check if they were still open by the time that we would arrive. If we would keep on going like we did, it should doable to be there at 5PM. Confident and optimistic we continued. 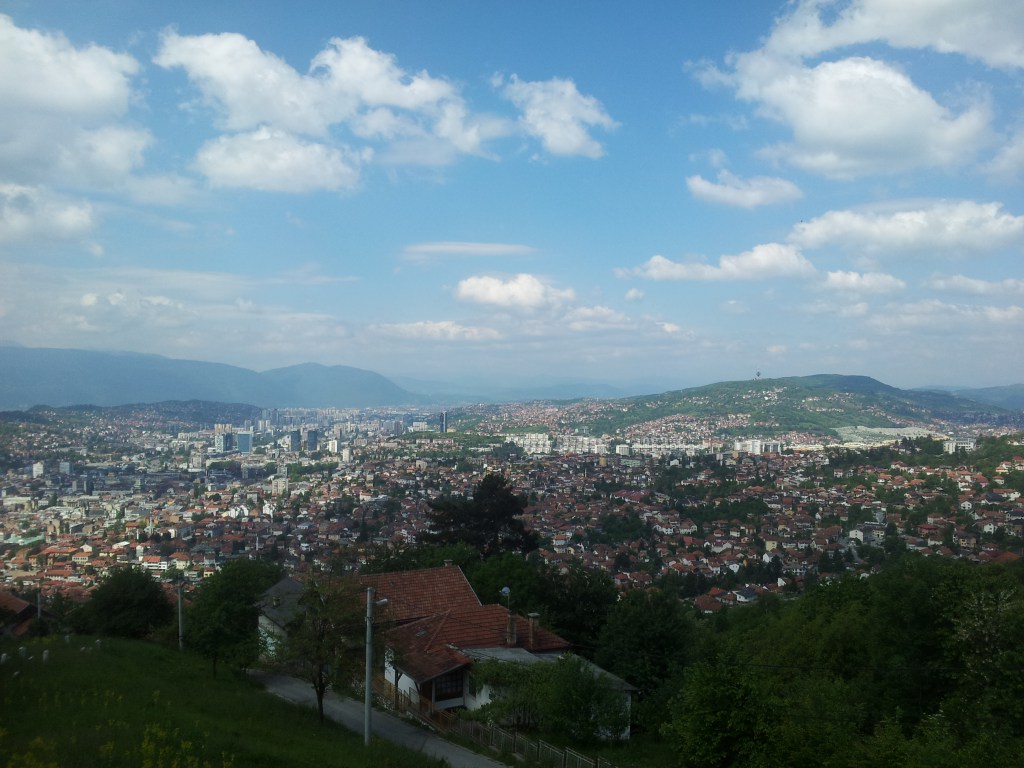 The description said that during the next part of the trail we had to make sure that we would stay on the paths, because of the sport shooting area we were about to cross. While walking on that path we heard several shots, but weren’t aware of the fact that bullets don’t care about hiking trails or hikers. When the shots became louder and a man started to wave at us, we realised that sport shooters also don’t care about trails or hikers. The man told us that this area is forbidden for hikers during the weekend and we had to make a detour along the road if we didn’t want to risk our lives… 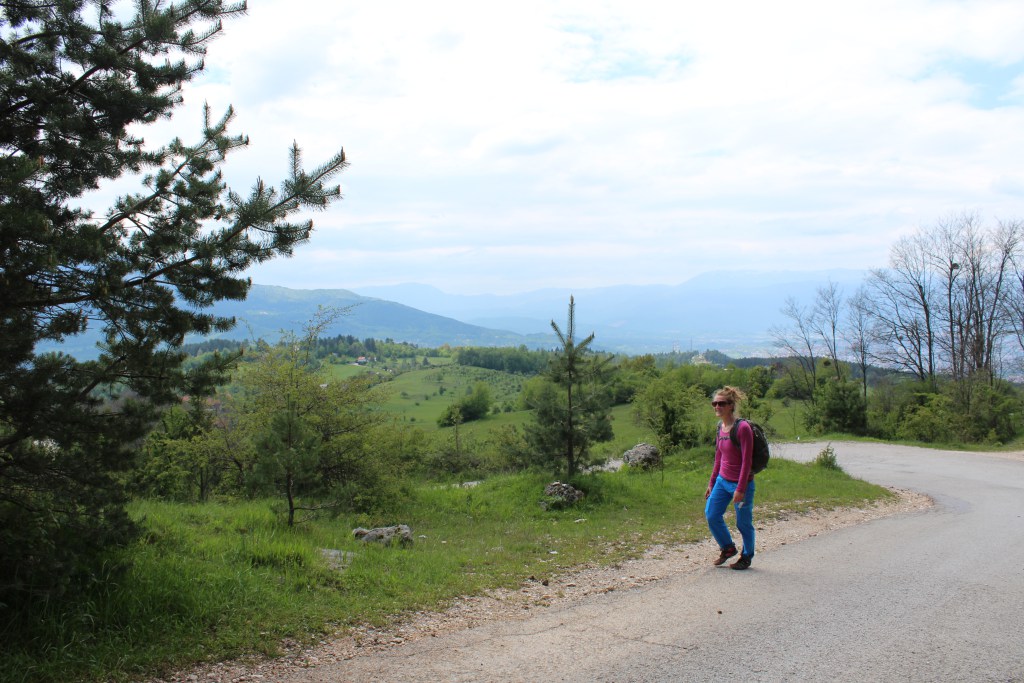 A bit bummed out we turned around and headed back to the road. Suddenly a car stopped right in front of us, for a second I thought of asking for a ride to our next exit into the forest. But we didn’t. A girl with dyed red hair got out of the car and started to ask us some questions. I still don’t speak or understand Bosnian, so I let Maggie do the talking. The red haired girl explained that she was drunk… and wanted us to take a picture of her and her boyfriend with the amazing city view. That was the good thing about the detour, the spectacular views and crazy passer-by’s. 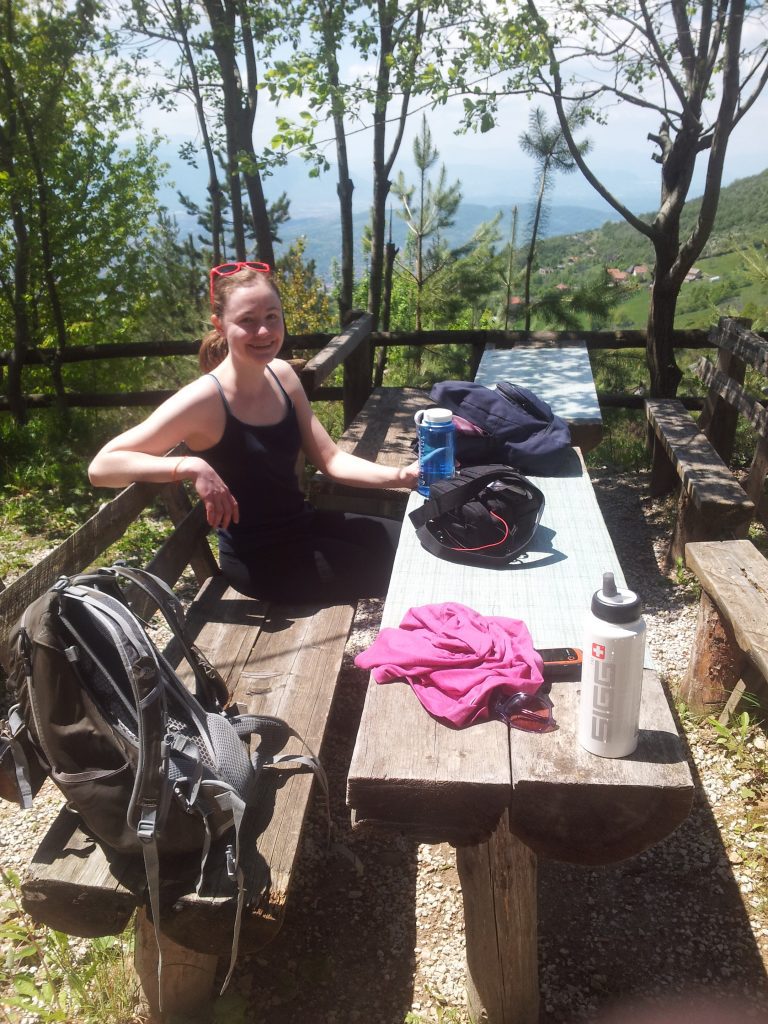 In Čavljak we stopped for a coffee at the mountain lodge where some man were playing cards, smoking and drinking beer. When they noticed the FiveFinger shoes I was wearing, their card play suddenly didn’t seem that important anymore. They invited us to stay for a drink, but we explained that we were on our way to Vukov Konak which was still quite a long way to go. Like all the other people we would meet along the way they started to warn us that it was really really far. Most people even said it was irresponsible to go all the way up there with just the two of us.

At that time we were still optimistic that we could make it, we did most of the climbing and had already done one third of the tour. How hard could it be? We had all day and it was only 20 kilometres after all. 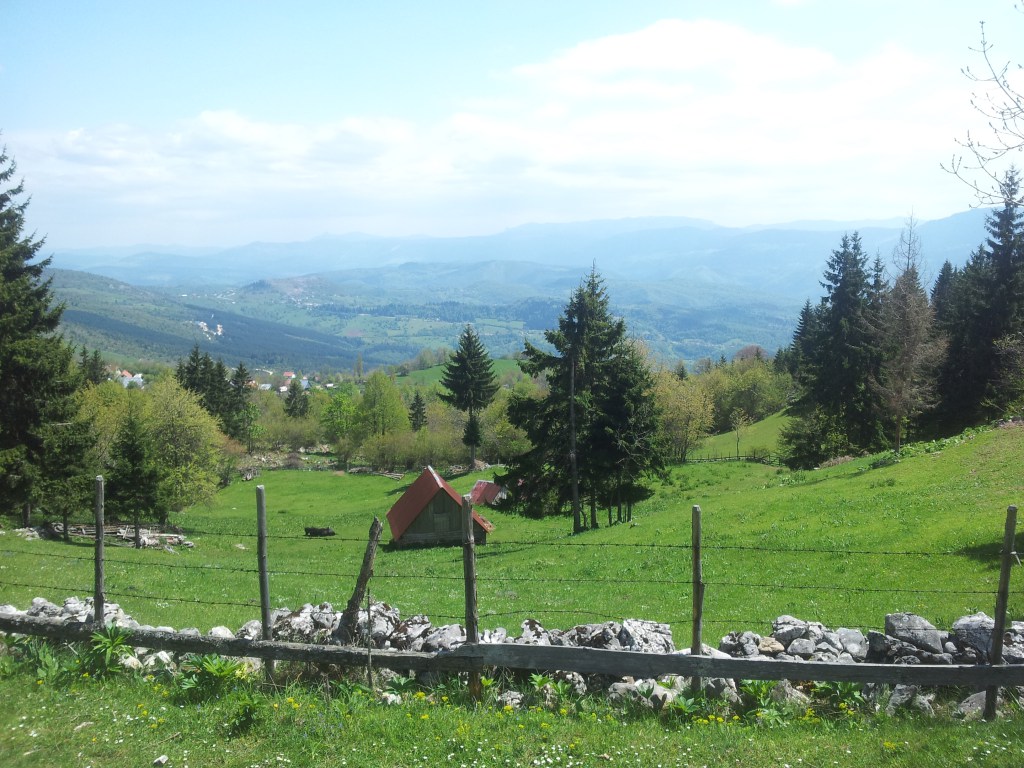 The road took us to a forest, finally we could leave the asphalt and feel the earth under our feet. This was absolutely the most lovely scenery I’ve seen so far. Indescribable green grass, wide views and cute wooden huts. Although there were several refreshment stops, it wasn’t crowded or spoiled by people. In fact, because of these little bars there was a special vibe, all kinds of people who were enjoying just as much as we did. Before we knew it, we sat down for another break. This time we did accept an invitation of two beer drinking men and got ourselves a rakija before we went on.

Unfortunately we discovered that we were not quite as far as we thought we were, which meant that we still had halfway to go. My legs didn’t agree on the rakija pauza and started to complain. At the same time, the sun disappeared behind dark grey clouds and all of the sudden there were no trail markers anymore. On the GPS we could see that we were off the purple line, but we couldn’t find a path that led us back. Add the worries of all the people we met during the day ánd dense, eerie forest that lied in front of us… I seriously started to doubt if it was wise to go on. Maybe we had been a bit naive and a bit too slow after all. I didn’t want to get lost in that dark forest full of animals I was still a bit afraid of.

Going back to the last trail marker we had seen didn’t make sense, because the description told us that we had to leave that dirt road and walk on the northern side of the Crepoljsko mountain towards the forest, which we did. The only option, beside going back to Sarajevo, was to walk a few metres in each direction to see where we would meet the purple line on the GPS screen. Luckily there turned out to be a very small path through the grass after all. But at this spot, a signpost would have been kind of welcome. 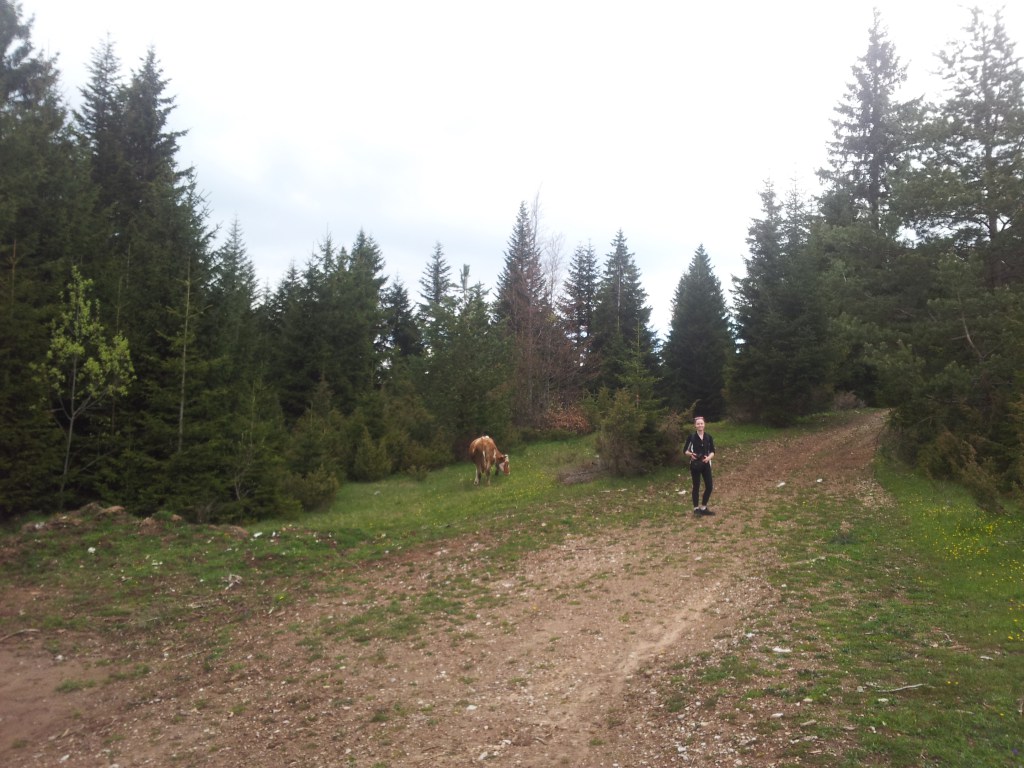 Once we finally got back on track we stepped up our pace a little, but still not in hurry though. Maggie was at this point a bit more positive than I was. Maybe because she likes the forests which is giving me the creeps. I prefer mountain landscapes with wide views. But I have to admit that it was a kind of special feeling to be all alone, or just with the two of us, in that huge wild piece of nature. Our conversation turned to more serious subjects, maybe heavy but not creepy at all. It was a completely different atmosphere which led to completely different emotions and feelings than the lovely green landscape only a few hours ago did. I love to be on my own, but during this hike, the fact that we were together and did it together, added something what couldn’t be experienced by being all alone. And I’m very grateful for that. Although it was just a day-hike and I’ve done much more demanding tours, this hike, this day, this adventure thought me how important it is to believe in yourself.

All of the sudden the high trees made room for a great view over the hills and mountains before we took the last turn towards our destination. The threatening sky slowly disappeared and the moment we arrived at the guesthouse, the sun started to shine. At 5PM exactly we walked onto the terrace of this beautiful place surrounded by nature, right in the arm of the warm and friendly Vukov Konak crew. 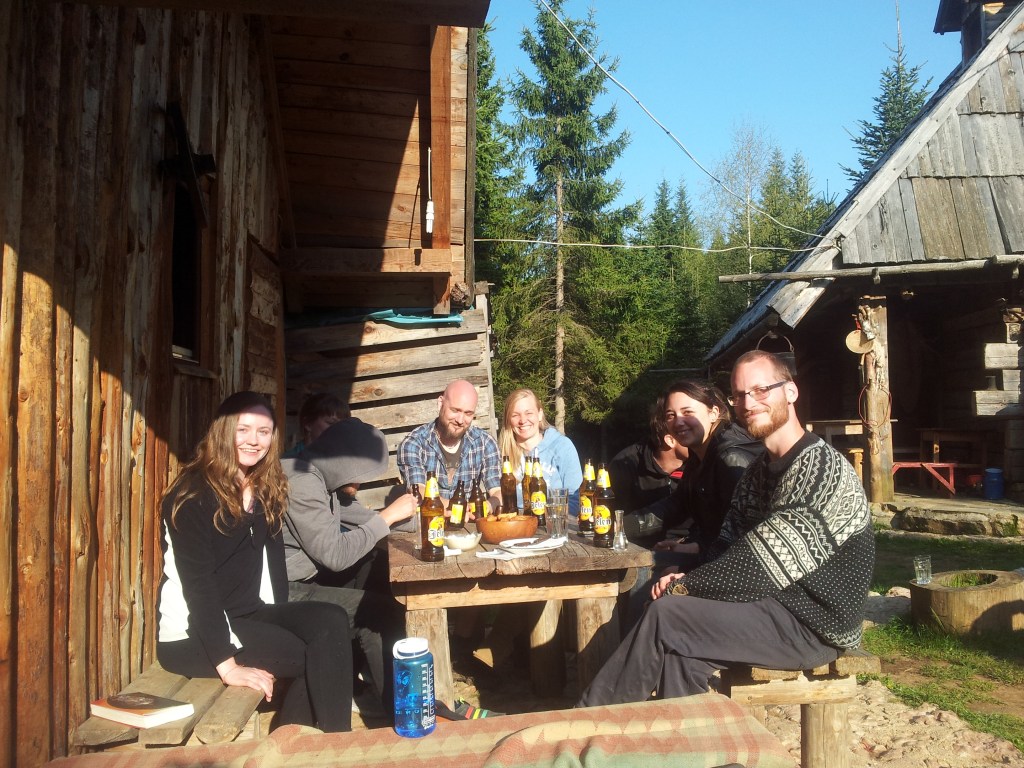 Maggie had to go back to Sarajevo, but I decided to stay for the BBQ and ended up spending the night. It was a special evening with an eclectic group of people. Guests, volunteers, owners. Finns, Germans, Hungarians, an American girl, the Bosnian host and a guy from Slovenia who was there to pick up his new Finnish girlfriend. Rakija and a Finnish sausages. Bosnian coffee with Lakka (I believe it was). Stories and a campfire, music and more beer. And of course the very amusing goat with a name I forgot.

If you’re planning to hike this trail as well, (and you don’t want to get lost where we did) you can download the GPS track, maps and descriptions here on the Via Dinarica website.

This blog-post was originally published on EVAdinarica Project website.