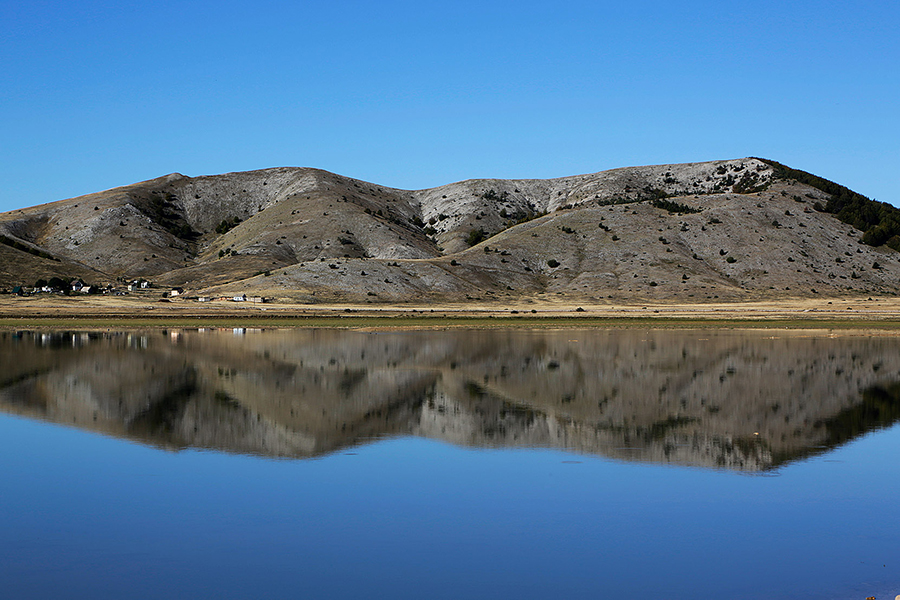 The cab driver drops me off at the start of stage 27. Here it is the first time I’m welcomed by bright and shiny Via Dinarica-waymarkers. Together with a clear and blue sky this feels like a warm welcome! Today is an easy hike over a Jeep track following green and flowery hills. Along the way there’s some sights: caves,  sinkholes, Eastern European art and crosses marking a pilgrims route. 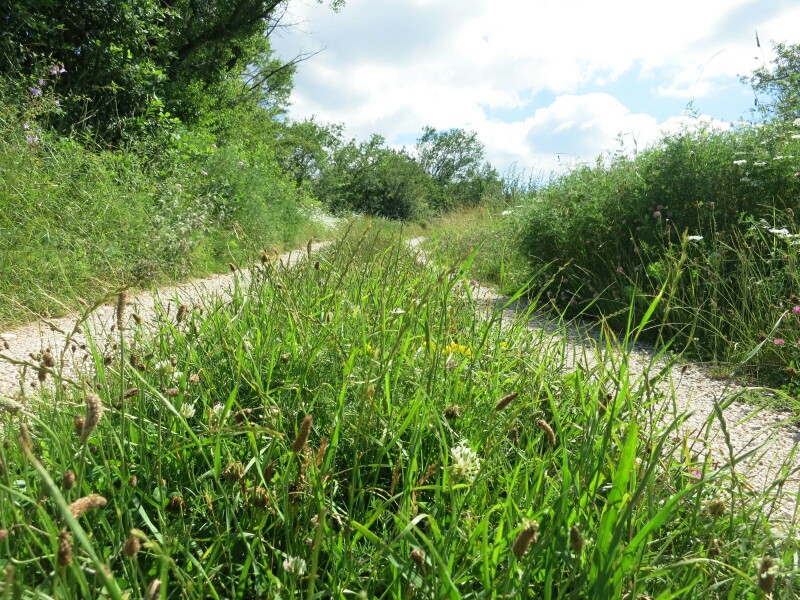 Today is an easy hike over a Jeep track following green and flowery hills. Along the way there’s some sights: caves,  sinkholes, Eastern European art and crosses marking a pilgrims route. 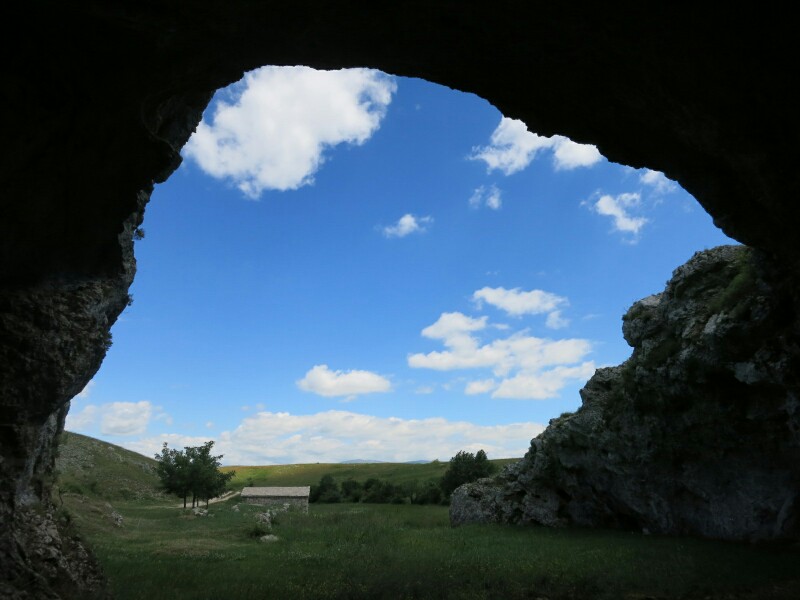 For thru-hikers there’s something more interesting waiting: restaurant Lovre (WiFi, good food and very friendly staff). A few down the road there’s also a convenient store which is opened from 7-21. After a plentiful lunch I decided to also hike stage 28 – making it a 40km day. This stage starts with the crossing of a plain,  a nice and fast hike through fields of grain and flowers. 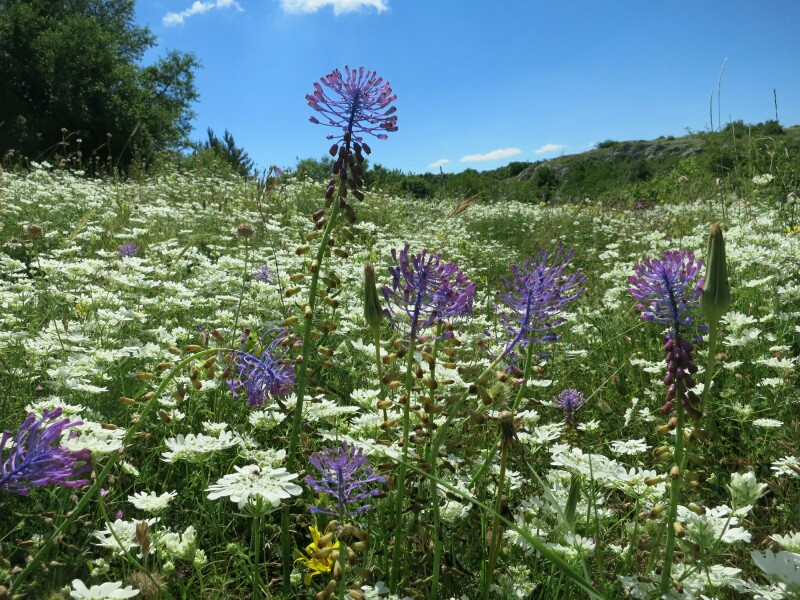 Than starts the climb up the mountain. There plenty of markings,  but sometimes they’re hiding I have the bushes. At some points there’s quite some weeds growing, but not as much as at certain parts in Croatia. Getting good closer to the top the markings disappear but it’s easy navigating up here.  Together with Maria I share the views over the valley. 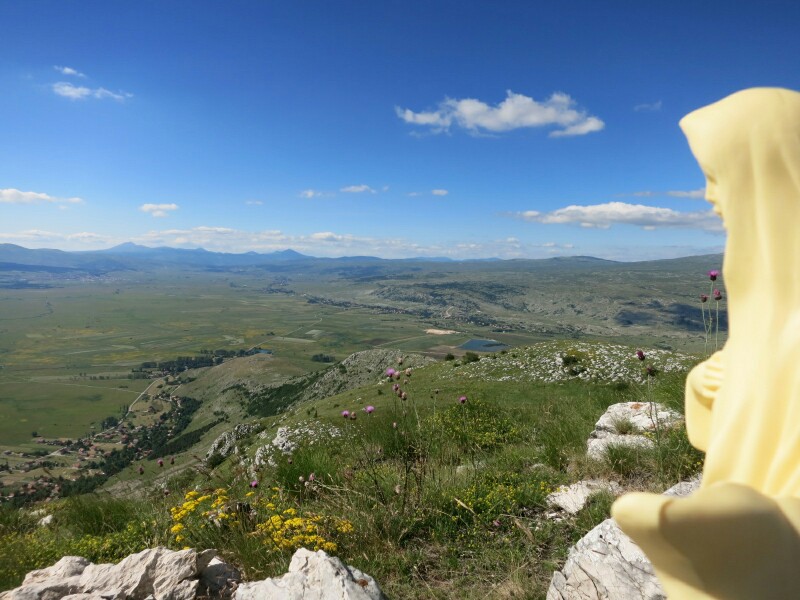 Hiking downhill there’s almost no markings,  these return at the little stream where whereas refill my waterbottles. Than starts a easy hike over a green forestroad. Lots of work has been done here to mark the trail. 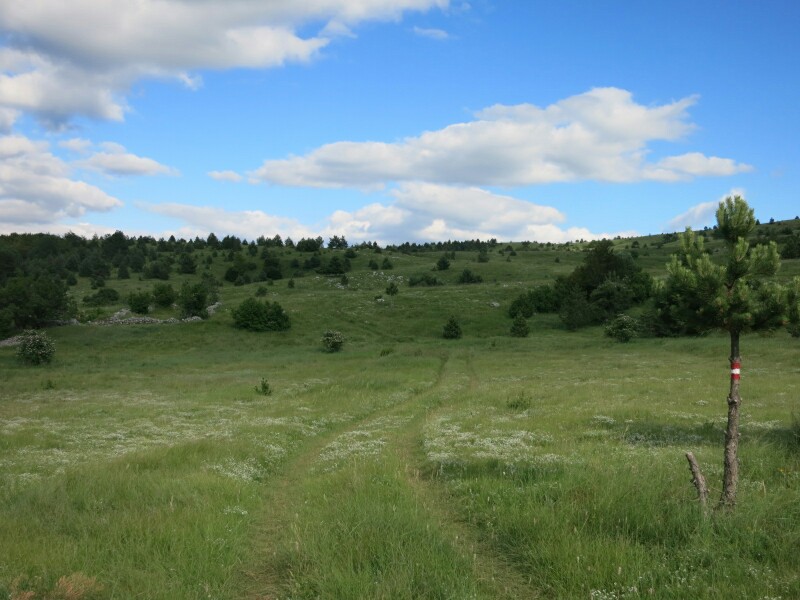 Just before the sun sets behind the mountains I find myself a spot to bivouac with a a view on the upcoming stage. 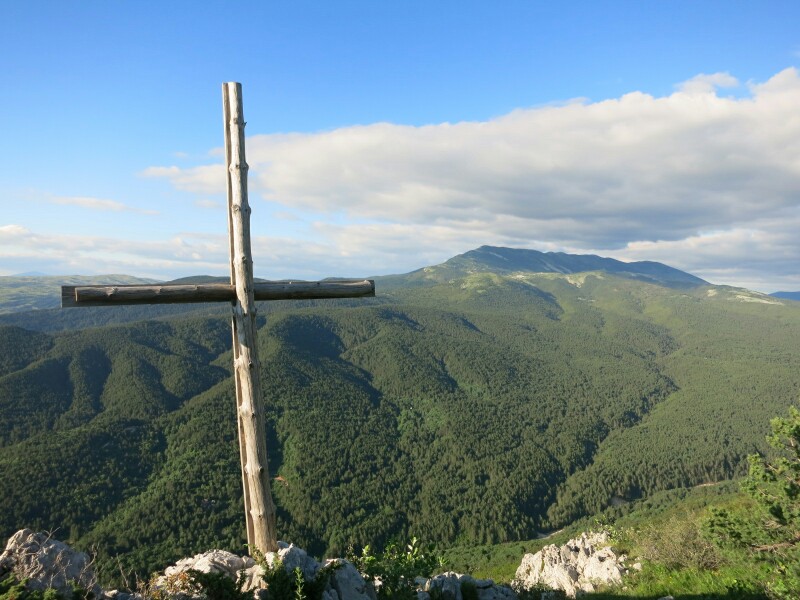 It is summer in BiH! Today: again clear blue skies and it is very, very warm. This stage starts with a hike over a forest road. People and big machines were cutting trees and probably getting this pittoreske road ready for forestry. 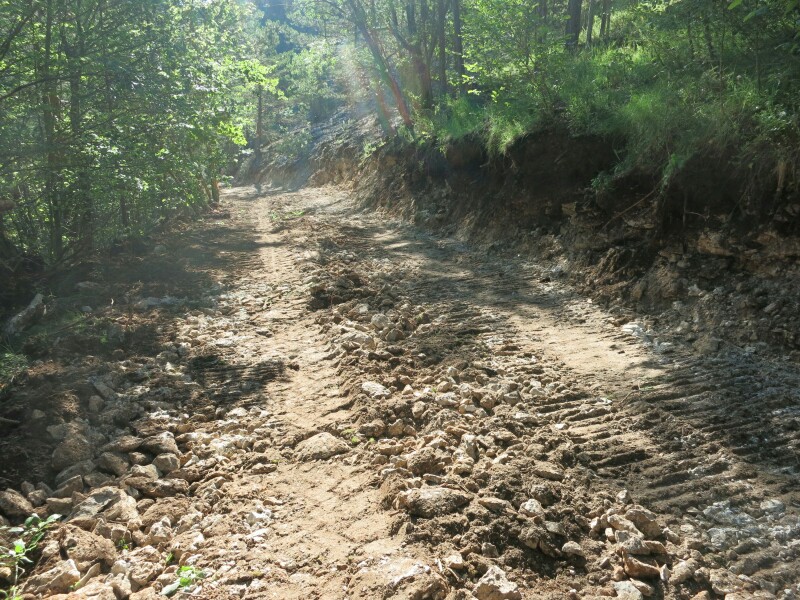 Hiking up and over Vran mountain on a very warm day wasn’t easy.  There’s lots off extra ups and downs due to small peaks and the saddle. I actually had to rewrite this blog since I lost my mobile phone, I but there’s way more kilometers in this stage than mentioned on the Via Dinarica website. 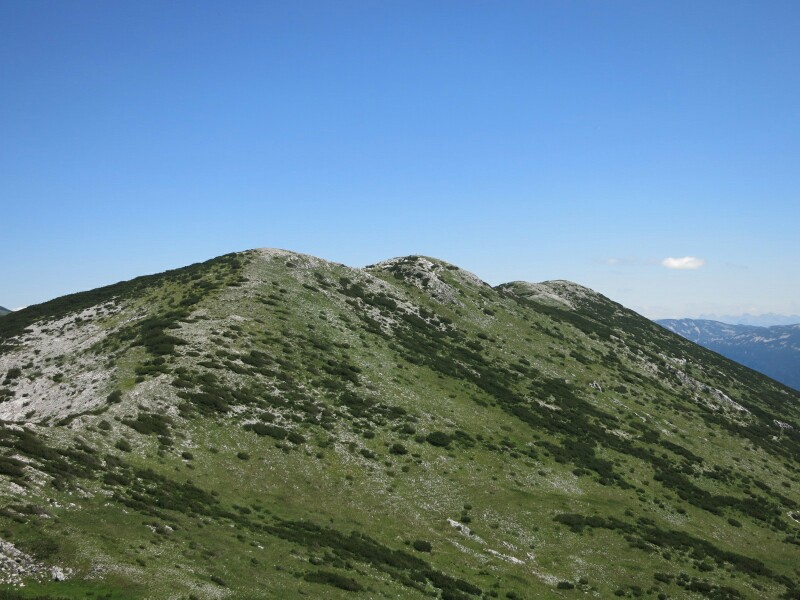 The hike downhill,  towards mountain Hut Blidinje, is pretty steep with lots of loose rocks. It’s tough on the knees. 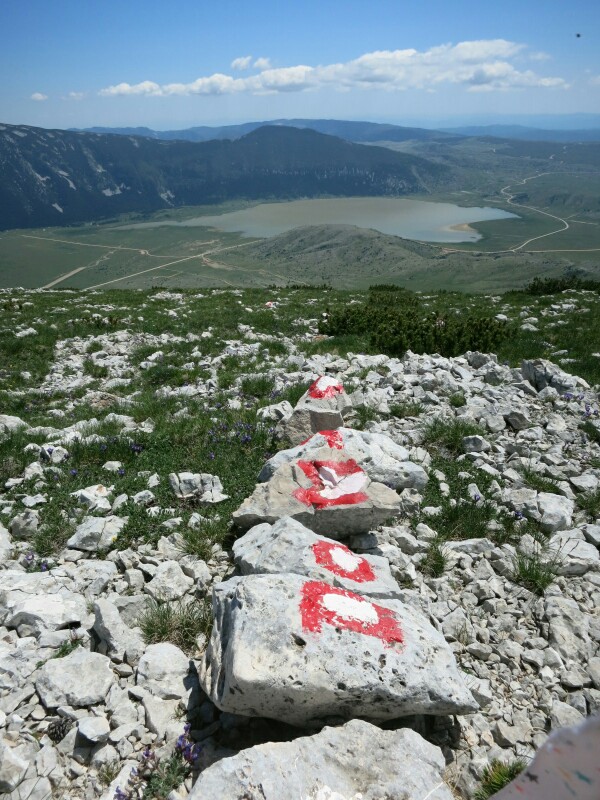 This lodge is a little off trail and it’s being renovated at this moment. I actually met some people working on it,  lucky me! Within no time I was seated, given a cola and a beer and their lunches’ leftovers! I intended to sleep at the grill area, but I was given a key so I could sleep inside. And take a shower. And charge my devices. Even though the hut is being renovated it’s already a nice place to stay! 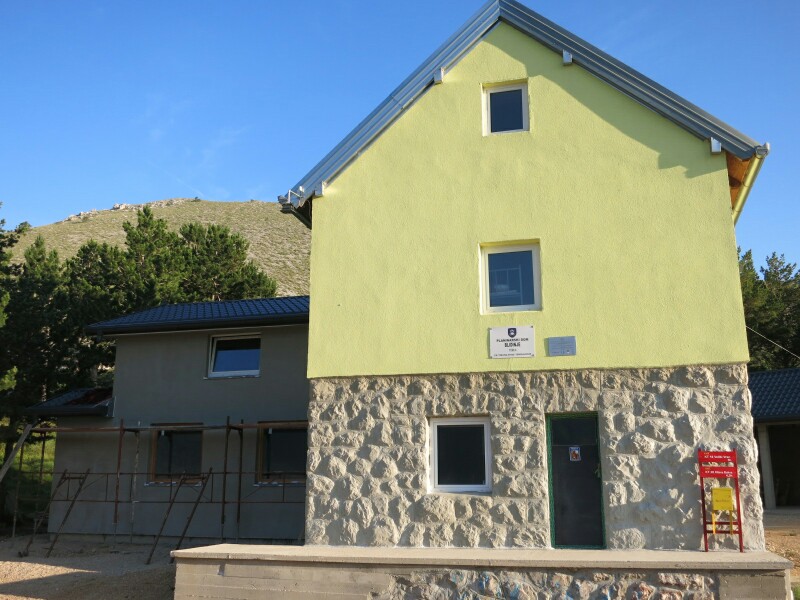 To get to Cvrsnica there’s first a plain to cross. Here the GPS was a little bit of the markings. At Donje Bare spring there’s lots off weeds, a little bit of Bushwhacking is needed here. After this it’s marking-galore again to almost to hut Plasa. Later more on that. From here the only way is up.  And here too lots of trailwork has been done. A trail has been cut through dwarf pines and there’s markings and waymarks. The trail is new, so not all parts are an easy hike.

Once out of the forest there’s stunning views on the surrounding mountains. Here my camera really got broken, to see the stunning views you’ve got to hike these mountains yourself. 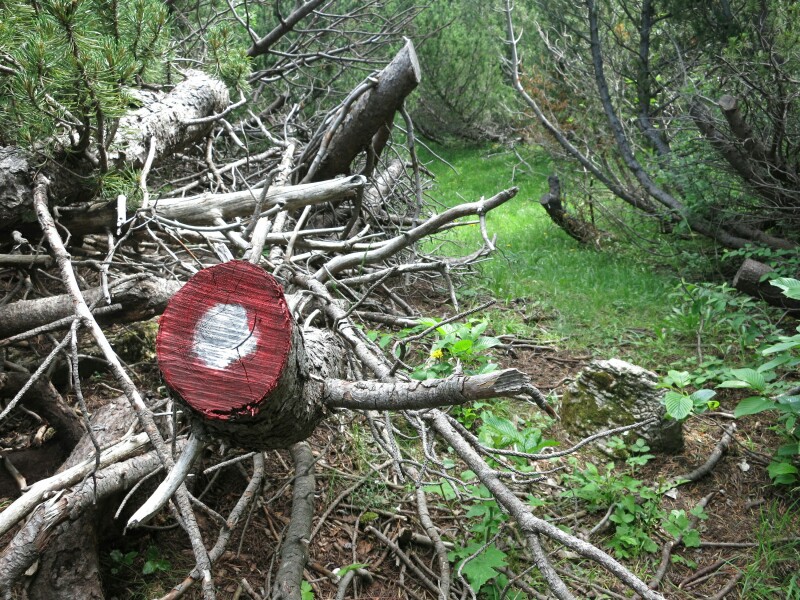 After a hike over a high plain there’s the climb up to Vrutak. This seems like a imposing hike, but the trail is easy to hike and it’ll take less than 45 minutes. 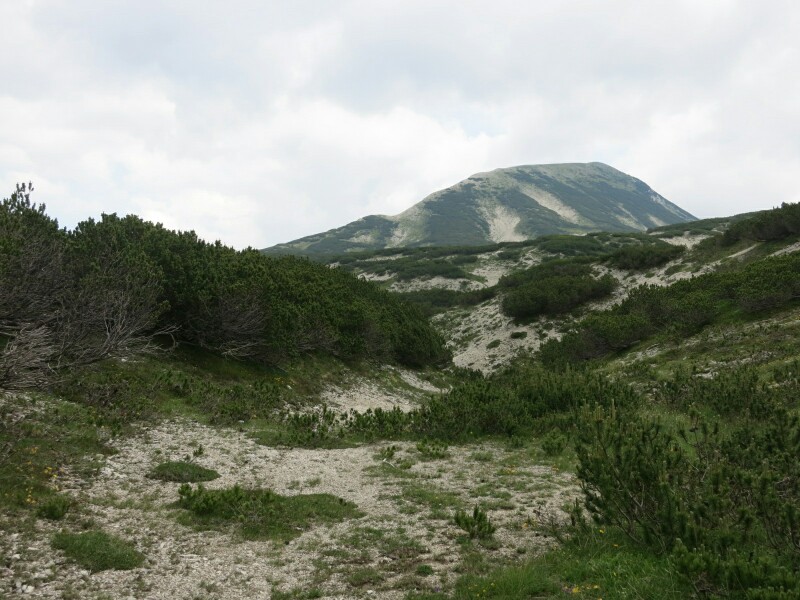 After this it’s a short and easy hike to Hut Vrutak. It’s 5 minutes off trail and not 15 like stated on the signs. The hut is only open by arrangement, I took a long break at it (and refilled my waterbottles).

To Hut Plasa
The trail from Vrutak to Plasma is great: amazing views (also on Prenj), well maintained maintained and probably attracts a lot hikers. Just before Plasa the markings disappear. A trail seems to lead into dwarf pine bushes. Don’tever try to Bushwhack those! I eventually ended up hiking around the evil dwarf pines and than up to last hill.From here it is straight down over gravel. This part of the trail definitely needs some TLC.
Even though I only stayed outside this hut, I this is a really nice one.  Even the outhouses are near.  The The views on Prenj are amazing from here. The first part of the hike to town from Plasa is pretty OK, just lots of downhill with views on the mountains. Then it reaches a dirtroad, than the city’s landfill and than few km’s asphalt lead into Jablanica.

This is a small town with two big grocery stores, restaurants, a motel above café Hollywood (don’t stay there they play loud music every night. Café Ruza also has rooms) and busses running to Sarajevo and Mostar. I took a zero to buy a new camera in Mostar.