Walking from Valbona to Theth 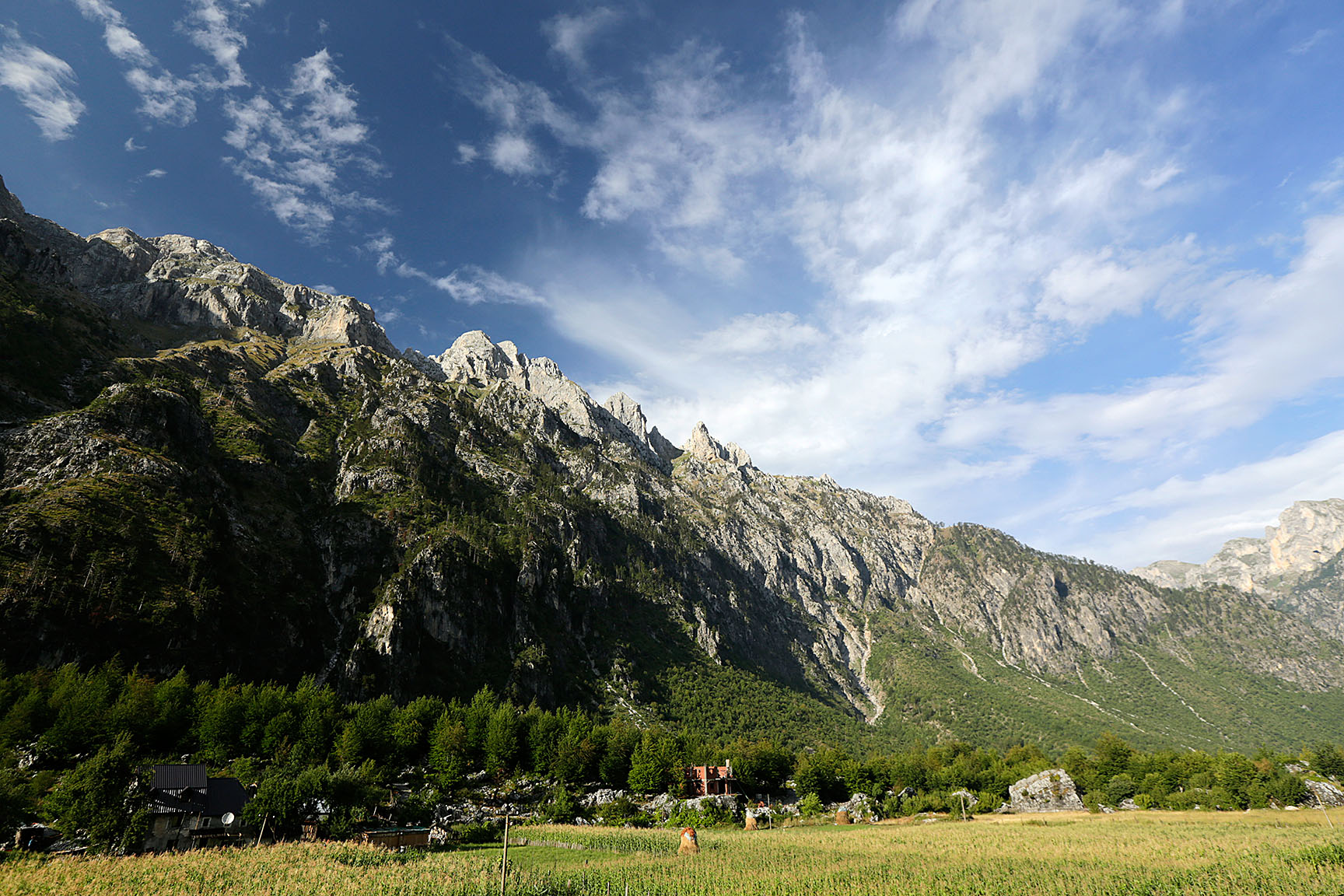 First of all, anyone can walk to Theth. From Valbona, I mean. Or from Theth to Valbona as well, of course.

The walk from Theth to Valbona started out getting itself written about back when just getting to either place, in the first place, was a feat, and the idea of walking from one to another was just icing on the off-the-track cake. The fact is, and I hope I’m not disappointing you, it’s not a terribly challenging hike. Six hours at the most, and in the last two summers a couple of enterprising fellows have even hewn (hewn more than built) cafes along the way. Okay, they’re beautiful and quaint, and made of ax-cut trees lashed together, but you can get coffee, beer, and even a good meal. Nowadays, you don’t need to walk more than an hour or two, before you can stop for “refreshments.” This is not to say that it’s not worth doing – not at all – but it isn’t a death-defying route, and it does NOT take several days. “Can we do it in one day?” sweet tourists, bristling with equipment and emergency gear ask me. “Will we survive?” their subtext. Yes you will.

Let me deal with this quickly: From Valbona, you can drive (or be driven) to the end of the cars’ road. From there, it’s 3.5km on the stony river bed to the beginning of the path, found in the last cluster of houses comprising the village of Gjelaj. From Gjelaj, you have a 2-3 hour climb of 800 meters, through a bit of forest, some meadows, a bunch of hairpins (switchbacks?) to the foot of the rock face that’s the steepest part of the wall of mountains cutting you off from Theth. At the rock face you make a left turn and nip along the base of the rock to the pass, and then skip over about three steps of scary steep stuff to take up the gentle forest path that goes down to Theth on the other side. It’s a nice walk. There are some very pretty meadows between the pass and Theth. That’s about it. It makes a perfectly credible adventure for a family, or for people who are not used to hiking much. 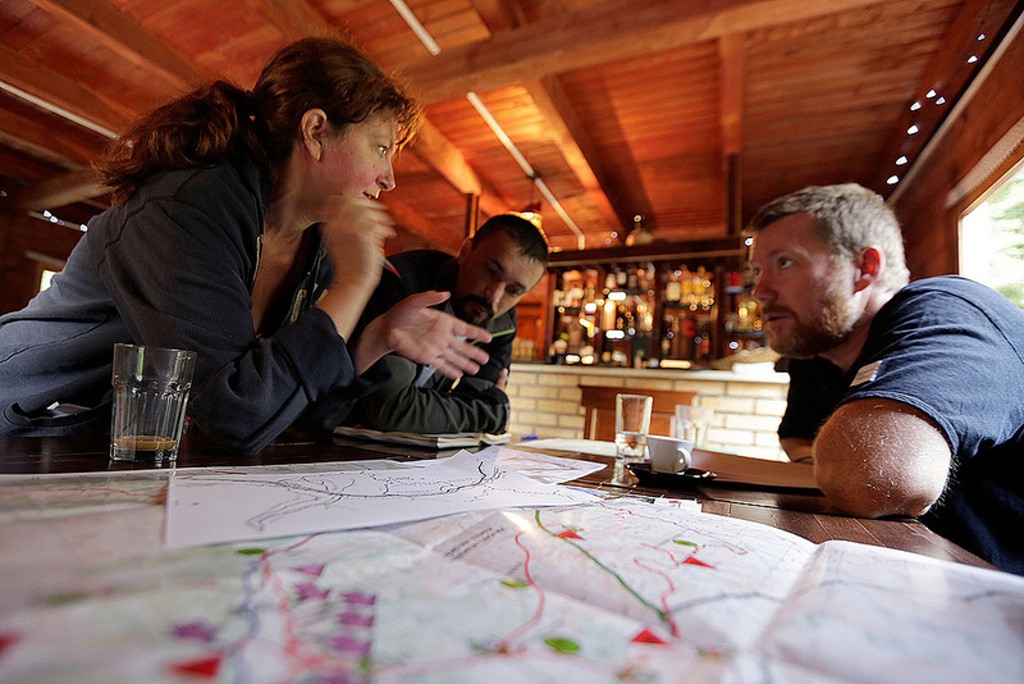 Of course, that’s in summer, when the track has mostly been beaten clear by the two or three hundred other people who’ve done it before you. According to one funny American girl (not me) it’s also lined with passed-out Southern or City Albanians in varying states of dehydration, they having been led to believe by the Shkoder (dis-)Information Center that anyone in dancing shoes can walk in the mountains, without the cumbrance of things like water. In early spring or winter, with the pass choked in snow, it’s another matter. Then the sensible approach to the pass is buried in several meters of snow, and it’s a sheer claw up to the pass, with the danger of avalanches ever present. But that’s probably not what you’re thinking of?

None of this is to say that there aren’t still romantic ways of getting from Theth to Valbona (and vice-versa). Two years ago Alfred and some cousins set off to prove the alternative southern and northern routes. I was in a snit when they left, so missed the southern test. From Valbona, you can walk south through one of two passes (Ndroqes from Dragobi or Zhaborre from Rrogam) either of which end you up in the Mysterious Lost Village of Curraj i Eperm. From there it’s a day or two walk (depending) to Nderlyse, the southern part of Theth. I have done most of the Ndroqes path, and I can attest that it’s mostly irritating and annoying. Lots of forest, and the path overgrown in most places. A long, Winnie-ther-Pooh style bump down from the pass to just above Curraj. Also, it’s apparently hard to find, as a French mountain guide just returned unsuccessfully after 3 days looking for it. Not sure about this. I found it, and I have no sense of direction and get lost coming out of bathrooms. Still. The Zhaborre pass is beautiful, but kind of going in the wrong direction, if you want to end up in Theth. I mean, you get yourself to Rrogam and then, instead of taking the 6 hours route, head off 9 hours in the wrong direction, to end up in a village a two day walk away from Theth. Still. It’s nice! And for people wanting a “will we survive?” adventure, this is definitely the way to go!
Better possibly is the northern route. I’d recovered from my snit in time for this one, and dashed across the Valbona Pass (in 3.5 hours! So it can be done, although admittedly, I was showing off at the time) to meet Alfred and the cousins in Theth. From Theth you head north to Qafa e Pejës. This is all nice walking through pine scrub and classic high-mountain stuff. From Qafa e Pejës you are strolling north and then east through the roof of the world. Huge mountains seem to be folded out of children’s modeling clay, with all the weird cake slices and massive slabs of rock pierced by holes you’d expect. There’s no one up there except one odd group of shepherds with about 300 sheep, ‘living’ in an old army hut. Not normal stan living, as there’s no family, no women or children, and absolutely no comfort. The men very sweetly made us coffee, and sat with us, perched on various packing crates and tins, next to their mattresses in the mist of flies inside their bare barracks. From there you head east along the “Towers of the Dragons” towards the Jezerces Lakes. We slept in a cave, the Cave of the Old Malesori Woman, where we unearthed about 100 old bullet casings when we tried to level the ground to make our beds. She was tough, that old woman. The mountains echoed weirdly with the barking of the shepherds’ enormous hounds. In the morning we headed off due south, climbing over various rock faces and snow patches, to follow some very basic cairns and red paint slashes to the peak of Jezerces, the highest mountain at 2691m (give or take) wholly within Albania. From there we did a bold (read blind) descent from the (horrible) scree of Jezerces to some identical (take your pick for route) rolling mountain meadows, onto a precipitous switchback which lead in turn to an oterg – Albanian for a sort of avalanche-prone vertical river of stones, which we stumbled down for seemingly hours during which it got dark and then hours (?) through scrubby beech forest to reach Kukaj, from where we staggered exhausted and blind back down the dirt road to Valbona. Absolutely do-able with a guide. Insane without one.

That said, you could leave off the peak of Jezerces, and carry on to the Lakes. Camp there and then find your way on the reasonable path through Mali i Zi (Montenegro) back to the passes by Maja e Rosit, and walk down sensibly to Kukaj. Of course, this can all be reversed.

If you’re not super confident with map and compass (or map and GPS) you still might want a guide, but either of these ways, I humbly submit, is more in keeping with the do-or-die spirit in which people seem to face the 6 hour walk to Theth.